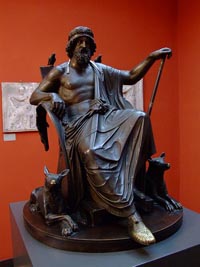 The supreme god of the Norse pantheon, the most worshipped among Viking gods. Odin corresponds to West Germanic Woden or Wotan. Etymology of his name points to poetic inspiration and shamanic ecstasy. As it seems, initially Odin was a patron of military unions and initiations, as well as a sorcerer god. With time he became a god of heaven and a major god among Æsir. Odin is served by two ravens Huginn and Muninn, as well as by two wolves, Geri and Freki. He owns an eight-legged horse Slepnir. He wears a broad-brimmed hat and a blue coat. Odin is one-eyed, because he sacrificed his eye at Mímir’s well. Odin bestows worthy poets with his mead of inspiration. As a sacrifice to himself, he hung on the world tree Yggdrasil, pierced by his spear Gungnir, in order to learn the wisdom of magical runes. One of Odin’s names is therefore the god of the hanged. In Asgard, the dwelling of Æsir, he has three halls: Gladsheim, Valaskjálf, and Valhalla. In Valhalla (‘Hall of the Slain’) Odin gathers the souls of warriors slain in battle, the Einherjar. Served by Valkyries, they feast there and prepare for the final battle of Ragnarök. 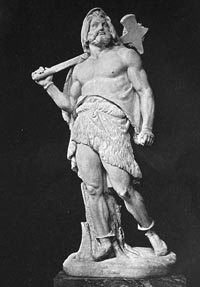 Thor is a Viking god of thunder, storm and fertility, a hero who protects Asgard and Midgard from giants and monsters. Unlike Odin, who was a god of war and warriors, Thor was closer to farmers. Thor’s wife is the golden-haired goddess Sif. Thor is also a lover of the female jötunn Járnsaxa. He wields huge hammer called Mjöllnir. He also owns iron gloves and a magical belt, which are his main treasures. By Sif, Thor has a daughter Þrúðr, a goddess and perhaps a Valkyrie. By Járnsaxa, he is a father of Magni. Thor himself is described as a son of Odin and Fjörgyn, personified earth. He rides in a chariot pulled by two goats, Tanngrisnir and Tanngnjóstr, whom he is able to eat and resurrect each time he has eaten them. Thor lives in Thrudheim (‘Home of Strength’). In the sources, he is describes as a fierce red-haired and red-bearded god. During the events of the Ragnarök, Thor will fight against the world serpent Jörmungand and they will kill each other in this final battle. Thor is probably the most referred Norse god in modern pop culture. The swastika symbol is identified by many researchers as representing the hammer of Thor. 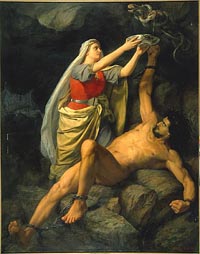 Loki is a Norse god who is sometimes hostile to other Æsir, derides them and acts with cunning and insidiousness. Loki as a son of Fárbauti and Laufey. Poetic Edda mentions that he is a brother to Helbindi or Býleistr (names of Odin). Prose Edda also speaks about their brotherhood of blood. Loki and his wife Sigyn have two sons, Nari and Narfi. However, by the giantess Angrboda, he is also a father to underworld monsters Hel, who rules in the realm of dead, wolf Fenrir and world serpent Jörmungand. Having turned into a mare, he also gave birth to Sleipnir (‘Slippy’), the eight-legged Odin’s horse. With Odin and Hoenir, Loki takes part in the adventures related to the giant Thjazi and obtains the treasure of the dwarf Andvari. As a companion to Thor, Loki helps him in his struggle with the giants and gets back his hammer that was stolen by Thrym. Loki is a trickster with clearly shamanic abilities like shape-shifting. In the end, Loki was cruelly punished by the gods: after they caught him, he was bound by the entrails of his son Nari, while his son Narfi changed into a wolf. Skadi, Thjazi’s daughter, fastened a venomous snake above his face, but Loki’s wife Sigyn held a basin to collect the dropping venom. 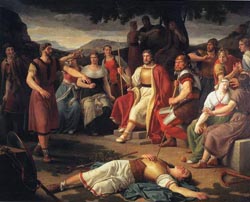 In the Viking religion, Balder is a young god, one of the Æsir. He is married to Nanna and has a son Forseti. Balder himself is a son to Odin and Frigg and a brother to Hermóðr. Balder lives in a beautiful hall Breidablik, and owns the greatest ship ever, Hringhorni. For the most part, Balder myth is told in the Poetic Edda, even though it is also known from the Gesta Danorum by Saxo Grammaticus. Balder is mentioned in one of the two Merseburg Incantations. According to the myth, Balder had evil dreams that presaged his death. Odin rode to Hel, where he awakened a seeress who foretold that Balder would be slain by the blind god Höðr. Frigg made every object on earth vow never to hurt Balder, except mistletoe, since it was too weak a plant. Balder became invulnerable, and gods often entertained themselves by shooting him. Loki gave a weapon made of mistletoe to Höðr who killed Balder with it. Balder’s death was a great tragedy for Æsir. He was burnt on his ship Hringhorni. Nanna, who died because of her grief, was put in the same pyre, as well as Balder’s horse and Odin’s magical ring Draupnir. 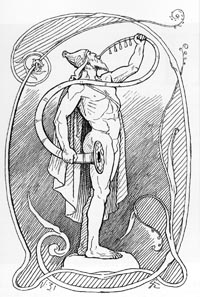 Heimdall, ‘the whitest of the gods,’ is described as a son of Odin. Heimdall’s dwelling is called Himinbjörg (‘Heaven Mountain’), which is located near Bifröst, the bridge that connects earth to heaven. As the guardian of gods, Heimdall has keen ear and acute eyesight. He owns the horse Gulltoppr (‘Golden Mane’). His hearing (according to other interpretation, his horn) is hidden under the roots of Yggdrasil, probably together with Odin’s eye. Before the end of the world (Ragnarök) Heimdall blows his horn Gjallarhorn, calling the gods to the final battle. According to the Prose Edda, Mímir, the mysterious owner of the well of wisdom, drinks mead from Gjallarhorn. In skaldic poetry the sword is called Heimdall’s head and the head is Heimdall’s sword. During the events of Ragnarök, Heimdall and Loki fight and kill each other. Men are referred to as Heimdall’s children, and Heimdall himself as a son of nine sisters or son of nine mothers. He is also described as having golden horns or golden teeth. Heimdall is the keeper of the world tree and probably its anthropomorphic personification. Odin’s connection to Yggdrasil explains the ties between Heimdall’s hearing (horn) and Odin’s eye. 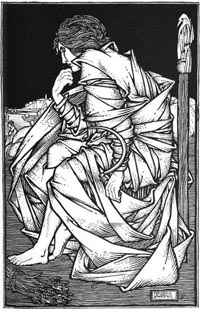 In Norse Viking mythology, Freyr (sometimes spelled Frey) was the god of vegetation, harvest, wealth and peace. His name derives from Proto-Germanic *frawjaz, ‘lord.’ Freyr is one of the Vanir. Adam of Bremen wrote about a heathen temple of Freyr in Uppsala, Sweden. There was an image of Freyr, the description of which points to a phallic cult typical for fertility gods. In the sources Freyr is described as a son to Njord and a brother to Freyja (Freya), who is also his wife, the marriage of Freyr and Freyja thus being incestuous. As a hostage among Æsir after the Æsir-Vanir war, Freyr falls in love with a female jötunn Gerd. She becomes his wife but he has to give away his sword, which was able ‘to fight on its own.’ Scarificial animals in the Freyr’s cult were horse and boar. Freyr owns the magical boar Gullinbursti whose mane glows illuminating the way. Another precious possession of Freyr is Skidbladnir, a magic ship that may be folded up as a cloth and hidden in one’s pocket. Deprived of his magic sword, Freyr kills the giant Beli with an antler. During the final battle before the end of the world Freyr perishes fighting with the giant Surt. 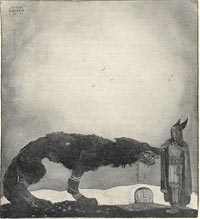 In West Germanic Týr’s name was Tiu, probably from Proto-Germanic *tiwaz, wherefrom Old Norse tívar, one of the designation of gods. Saxons and Angles referred to Týr as to Saxnot. Týr is etymologically equivalent to Ancient Greek Zeus; therefore initially he was perhaps the god of heaven. Tacitus describes him under the name of Mars, which points to his military functions. Snorri Sturluson says that Týr is wise and most courageous and that he is called upon in battles and single combats. In the myth about Thor’s trip to Hymir (in order to obtain his mile-wide cauldron), Týr accompanies Thor and is referred to as Hymir’s son. In other sources he is mentioned as Odin’s son like the rest of the Æsir. To ensure Fenrir that the chain put on him by gods would not hurt him, Týr places his right hand into Fenrir’s mouth, and the wolf bites it off (Týr is often referred to as ‘one-handed god’). During the events of the Ragnarök, Týr fights against Garm, Hel’s watchdog, and they both perish. Odin as a heavenly and military god overtook Týr in authority some time during the Migration Period. Týr may be compared to Celtic Nuadu, who also wields a sword and is one-handed. 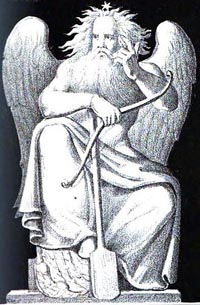 Njord is one of the Vanir, father to Freyr and Freyja. After the Æsir-Vanir war, Njord stayed as a hostage among the Æsir (in the Prose Edda he is often mentioned as an Áss). Njord is married to Skadi, a jötunn and goddess, a daughter to Thjazi. For nine days and nights Njord lives with Skadi in his dwelling Nóatún (‘Ship Enclosure’), which is on heaven, but also on the sea shore, and for the same period of time in Thrymheim (‘Thunder Home’), in the homeland of the giants. The author of Vafþrúðnismál says that Njord will come back to Vanir at the end of the world. Njord is rich and has power over sea, wind and fire. He is the patron of seafaring, fishing, sea animals hunting. Like all Vanir, he is also a fertility god. This may be seen in the cult of Nerthus, described by Tacitus (Nerthus is the exact female equivalent of the name Njord among continental Germanic tribes). It is possible that initially Njord and Nerthus were a ritual couple similar to Freyr and Freyja: Ynglinga saga mentions that among Vanir Njord cohabited with his sister. The same source indicates that after Odin’s death Njord reigned in Sweden.

Hoenir is one of the Æsir who, after the Æsir-Vanir war, remained as a hostage among Vanir, according to the Prose Edda. In Völuspá Hoenir, together with Odin and Lóðurr (Loki) takes part in the creation of Ask and Embla, the first human beings. After the Ragnarök, Hoenir will live in the renewed world.

Bragi is the Norse god of poetry (Old Norse word for poetry is bragr). He is renowned for wisdom and skill with words. He is a husband to Ydun, the keeper of magic apples and giver of eternal youthfulness.

Vidar is a silent god, a son to Odin and Gríðr, a female jötunn. During the final battle before the end of the world, he avenges Odin by killing the wolf Fenrir, stabbing him into the heart or by tearing apart his jaws.

Váli is a son to Odin and Rind, a female jötunn. One day after his birth he reached full adulthood and killed Höðr as a revenge for the murder of Balder. Váli is a representative of the younger generation of Norse gods who will survive the Ragnarök and live in the renewed world.

There are other gods like Ullr, Magni, Móði, Hermóðr, Höðr and Óðr who are also members of the Norse pantheon, but who are only occasionally mentioned in the extant sources.