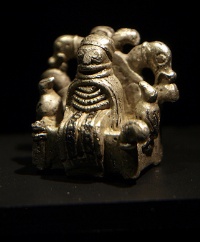 Last Saturday, November 14, Roskilde Museum site published an article (in Danish), entitled “Odin fra Lejre” (“Odin from Lejre”). It tells about an exciting archaeological find, a small silver figurine discovered early in September at Lejre (municipality on the island of Zealand, Denmark). Amateur archaeologist Tommy Olesen was metal detecting near the site where archaeologists from Roskilde Museum worked. Suddenly, the metal detector gave signal. Everybody quickly gathered around Mr Olesen to have a look at his find. It was a silver statuette representing someone seated on a throne. It was about 2 cm tall and weighed 9 grams. The find can be dated to 900 CE, which falls within the Viking Age. The most exciting feature of the figurine were two birds on the armrests of the throne and two beasts forming its backrest. These were immediately interpreted as Odin’s two ravens Huginn and Muninn, and Odin’s two wolves, Geri and Freki. The person on the throne could be no one else than Odin himself.
However, Dr. Rundkvist, archaeologist from Sweden, in his blog post, called this interpretation in question: according to his own explanation, Lejre silver figurine represents Freya. Indeed, the person depicted wears a lengthy dress, a shawl, and four bead strings. This looks more like the Viking Age aristocratic female attire.
There are other versions as well. Odin might have been depicted in a dress, since in Norse mythology he is known for “unmanly” magical practices (Odin is also mentioned to be dressed up as a woman to seduce Rind). The left eye of the figurine seems to be damaged, which points to Odin and no other Norse god or deity. However, it also might be Frigg, wife to Odin, who sits on her husband’s throne when Odin is away, or an image of a Viking Age female ruler.
The Lejre find is unique and exciting. Its correct interpretation, if at all possible, surely needs additional research.

Next post: Mel Gibson to Direct a Viking Movie