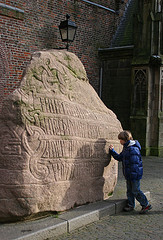 In my previous post on How to Translate Into Runes Correctly I wrote that no such thing as a correct representation of an English or Old Norse text in Norse runes can be achieved in practice. I know it sounds quite disappointing. Let’s consider what can be done about that. The practical advice I gave at the end of my text was to find a fragment of an existing Viking Age Younger Futhark inscription and use it for your tattoo, carving or engraving. I also promised to find interesting fragments of the Viking Age inscriptions for you. That’s what I plan to do, but before I post these I decided to cover some options that might seem to be totally discarded in my previous article.

First of all, if you plan to write in runes a name (your own, or names of your dear ones), you can’t find it on the Viking Age runestones, unless you are one thousand years old. My guess is you are not. That’s why I created a rune converter and wrote a guide on How to Write a Name for a Tattoo.

The algo that stands behind the converter is my attempt to achieve transliteration rules between modern English and five runic alphabets: Elder Futhark, Anglo-Saxon Futhorc, long branch and short twig Younger Futhark and staveless runes. Are these rules ideal? I don’t think so. However, I believe they are logical, I can explain them, and I offer them for free to everyone.

This explains why I say that no correct conversion into runes can exist. Conversion is based on a set of rules. There is no generally accepted set of rules between English and ancient runic alphabets. Whatever rules you apply, adherents of some other set of rules will say your inscription is incorrect.

Even if you use a fragment of an actual Viking Age inscription, you may fall into a blatant mistake: first, the fragment has to be chosen carefully, so that it makes sense; second, it has to really mean what you think it means. I plan to deal with this type of trouble in a series of posts later this year.

Now what about all other modern English words and phrases, beside the names? Shouldn’t one use them at all in a runic inscription? Why not. But you surely don’t want other people to point the finger of scorn at your tattoo or engraving and say it’s incorrect. How to avoid that?

Well, instead of the notion of correctness I suggest referring to a degree of authenticity. By authenticity I understand a supposed ability to read your inscription by someone who used the runes originally.

Case A. You write your name in the Younger Futhark (Elder Futhark) runes. If the rules on which your rendering is based are okay, a Viking Age Norseman (a Migration Period Germanic runemaster) would be able to pronounce what is represented in runes or recognize it, should he know the name already. Would such an inscription be authentic? Yes. Even though it wouldn’t be ideally correct, since Vikings (earlier Germanic people) did not have regular transliteration rules for other languages. Keep in mind that your name may contain sounds that did not exist at the period. However using similar sounds would allow pronouncing the name more or less correctly for practical purposes, like we do in English for Japanese or any other language with a very different phonological system.

Case B. You write in runes some text in a corresponding ancient language: Old Norse or Proto-Norse (even though we know quite little about it). Would such an inscription be authentic? Yes. Even though it wouldn’t be ideally correct, since Vikings (earlier Germanic people) did not have any stable spelling for runic Old Norse (Proto-Norse). It would be authentic because people living at the respective period and speaking respective language would understand what you mean, may be with some difficulty, but still understand it. Thus the practical goal would be achieved.

Case C. You encode in runes some modern English word or phrase. Ancient people would not understand that. That would not be authentic. However, authenticity is not something to be had at all costs. If your aim is to be understood, say, by peers in your community where everyone has some knowledge of the Futhark, you will achieve that. No matter what others will say about correctness or authenticity.

The practical advice at the end of this post is as follows: composing a runic inscription for a tattoo, carving or engraving, you’d better understand how authentic your variant will look, but don’t feel constrained to be authentic as described above. It is up to you to set up the amount of authenticity you wish in your inscription. And there will always be people saying your runes are incorrect, there’s no way to avoid that.

A Guide to Writing in Norse Runes
Should I Write in Runes Phonetically?