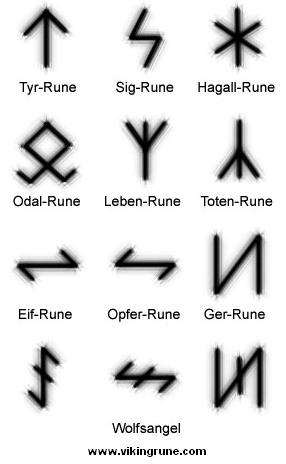 Some of the symbols treated in this article may be interpreted as pointing to Nazi ideology in certain contexts. Their use in the present article has nothing to do with it. Any such connotations are a recent development as compared to the long history of the most of these signs. Below both their original meaning in the Norse Viking culture and their use in Nazi Germany is treated, in order to demonstrate that the earlier, original tradition is much older. It should be observed that the interest towards runology so characteristic for early 20th century German Nazi circles was heated by the works of Guido von List, occult runic revivalist. Von List created his own version of the Futhark known as Armanen runes, allegedly revealed to his “inner eye”. Later Karl Maria Willigut was responsible for their use during the Third Reich. Armanen Futhark derives from historic runes but does not belong to the Norse runelore. Note that a few of these symbols are included into the list of symbols forbidden in Germany. However, Norse symbols are not hate symbols.

Týr is the Norse god of war, portrayed as one-handed warrior. Týr’s symbol is sword. Once he played a very important role in the Germanic pantheon. Tuesday is actually Týr’s day (Anglo-Saxons called him Tiw). By the Viking Age Týr was somewhat overshadowed by Thor and Odin. The Icelandic rune poem associates the rune with the god of the same name:

God with one hand and leavings of the wolf and prince of temples.

The Anglo-Saxon rune poem explains the meaning of the rune tir using the imagery of a star that had the same name (probably the North Star):

Tiw is a guiding star; well does it keep faith with princes; it is ever on its course over the mists of night and never fails.

In Nazi Germany the Tyr rune was also known as Kampf-Rune (Battle rune) or Pfeil-Rune (Arrow rune) and was symbolic of leadership in battle. It was widely used by various young people organizations after World War I, and later by Hitlerjugend and SA. Worn on the upper left arm, it indicated the graduation from the SA-Reichsführerschule. It was also used as the badge of the SS Recruiting and Training Department, as well as the emblem of the Waffen-SS division “30 Januar”. The Tyr rune also marked the graves of SS men, thus replacing the Christian cross.

Sig is the Armanen name of that rune. In the ancient Norse and Germanic runelore that rune always designated sun: its Elder Futhark reconstructed name is *sowilo, ’sun’, Younger Futhark name is sól, ’sun’, Anglo-Saxon Futhorc name is sigel, ’sun’. Guido von List changed the name to mean ‘victory’ (Sieg in German). The sequence of runes Sig and Tyr in his version of the Futhark together constitute Sigtýr, one of Odin’s names. In Nazi Germany Sig or Siegesrune (Rune of victory) was the most recognizable and popular symbol after Hakenkreuz (swastika). SS-runes insignia with two oblique Sig runes were created in 1933 by graphic designer Walter Heck. He got 2.50 Reichsmarks for the rights to this design. Nazi Siegesrune actually has nothing to do with the ancient sun symbolism of the *sowilo rune, the earliest Σ-forms of which substantially differ from later versions.

The star form of this rune is characteristic for the Younger Futhark, whereas its Elder Futhark form looks altogether different. Hagall means ‘hail’. The Icelandic rune poem describes it as follows:

Cold grain and shower of sleet and sickness of serpents.

In the Anglo-Saxon Futhorc this sign is called iar with the following explanation:

Iar is a river fish and yet it always feeds on land; it has a fair abode encompassed by water, where it lives in happiness.

The meaning of the word iar is obscure. It is usually interpreted as ‘eel’ or ‘newt’. Note that the Anglo-Saxon Futhorc also has the rune hægl, ‘hail’ corresponding to the Elder Futhark *hagall and used for the same sound, but unlike the Younger Futhark and Armanen runes it does not have the star form.

The use of the Hagall rune in the design of the SS-Ehrenring (SS honor ring, also called deaths head ring) was explained by Himmler as follows: “The swastika and the Hagall-Rune represent our unshakable faith in the ultimate victory of our philosophy.” In Nazi Germany it was also used as an element of the SS wedding ceremony. In the Armanen rune row the name of this rune is Hagal.

The Elder Futhark reconstructed name for this rune is *oþila, ‘inherited possession’ (note that the initial Norse form of this rune was slightly different: it didn’t have small ‘wings’ added). The Anglo-Saxon Futhorc name is eþel, ‘land, landed property’. It is not present either in the Younger Futhark or the Armanen rune row. The Anglo-Saxon rune poems explains its meaning as follows:

An estate is very dear to every man, if he can enjoy there in his house whatever is right and proper in constant prosperity.

In Nazi Germany Odal rune was symbolic of the Blut und Boden (“Blood and Soil”) ideology, focusing on a concept of ethnicity based on descent and homeland. It was also the emblem of the Waffen-SS division “Prinz Eugen”, recruited from the Volksdeutsche (ethnic Germans) community in Croatia. It was also used by Reichsbauernschaft and Hitlerjugend.

The Elder Futhark reconstructed name for this rune is *algiz, ‘protection’. It denoted the common Germanic sound *z, which corresponds to ON *-R in final position. In the Younger Futhark the same sign designated the sound m and was called maðr, ‘man’:

Delight of man and augmentation of the earth and adorner of ships.

In the Armanen rune row it is the 15th rune, which bears the name Man. This symbol was adopted by the SS Lebensborn Society and Ahnenerbe. In the SS documents and grave markers it showed the date of birth.

In the Younger Futhark this rune had the name ýr, ‘yew’:

Bent bow and brittle iron and giant of the arrow.

In the Third Reich it was understood as the turned over Life rune thus designating death. It showed the date of death in documents and on grave markers.

In the Third Reich it represented enthusiasm. The Eif rune was the early emblem of the SS adjutants assigned personally to Hitler. Origin unclear. Possibly a variation of the Elder Futhark *eihwaz rune.

In the Third Reich it represented self-sacrifice. Used by Stahlhelm war veterans’ association, as well as a badge commemorating the Nazis who perished during the 1923 Munich Putsch. Origin unclear. Possibly a variation of the Elder Futhark *eihwaz rune.

In Nazi Germany it was a symbol of communal spirit and a variant sign of the Waffen-SS division “Nordland”. This symbol’s origin and its relation to the Anglo-Saxon ger rune remain unclear to me.

Wolfsangel was a device to trap wolves. The symbol representing it was believed to have the magical power to ward off werewolves. The Wolfsangel sign does not belong to any runic tradition. In the 15th century it was adopted as an emblem of the German peasants’ revolt. Ever since it was regarded as symbolic of liberty and independence. In Nazi Germany it was an early emblem of NSDAP and later the emblem of the Waffen-SS division “Das Reich”. A squat version of the Wolfsangel was used as a badge of the Weer Afdeelingen, Dutch equivalent of the German SA.

Copyright notice: If you want to print the image above for your own personal use, feel free to do so. Do not crop, resize, photo-montage or otherwise alter the image. Any commercial use is strictly forbidden.