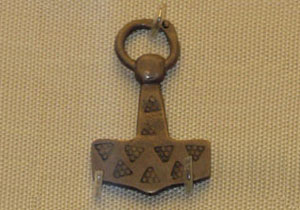 Mjöllnir or Thor’s hammer is the weapon of the Viking god of thunder. Initially, Thor’s hammer was thought of as made of stone, but in the Eddaic tradition it is an iron weapon forged by Svartálfar (black elves, correlated with the dvergar, dwarves) named Sindri and Brokkr. In the Norse myths Thor’s hammer is often understood as an axe, which, being thrown, comes back like a boomerang. It is also capable of becoming so small as to be carried under the clothes. Mjöllnir is Thor’s characteristic weapon, like Gungnir, Odin’s magical spear, or Týr’s sword.

Thor’s hammer is feared by jötnar, giants of Norse mythology (singular jötunn) who endeavor to steal it or decoy the god of thunder into their lands without his hammer and Megingjörð, Thor’s belt of power. Miniature pendant replicas of Thor’s hammer were very popular in the Viking Age Scandinavia. The variant specific for Iceland was cross-shaped, while Thor’s hammers from Sweden and Norway tended to be arrow or T-shaped. According to some researchers, the swastika shape found in East Anglia and Kent before Christianization, may be a variant of the same symbol. In the original Old Norse manuscripts the name of Thor’s hammer is spelled either mjǫlnir or mjǫllnir. It is thought to be etymologically related to the English word mill and to mean ‘crusher’. Another version states it is related to the Russian word молния and the Welsh mellt, both meaning ‘lightning’.

Many modern Thor’s hammer pendants try to feature the word Mjollnir in the Elder Futhark runes, simply replacing each letter with a corresponding rune. The procedure is incorrect. Mjolnir is an Old Norse word. Old Norse developed in the 8th century. Due to its difference as compared to its earlier form, Proto-Norse, Vikings were to reform their runic writing system. As a result, they adopted the Younger Futhark. By the end of the 8th century the Elder Futhark was not in use any more. If we were to write the name of Thor’s hammer in the Elder Futhark runes, we would have to reconstruct it in Proto-Norse. Indogermanisches Etymologisches Wörterbuch reconstructs it as *melð[u]nii̯az (one should keep in mind that any such reconstruction remains a theory). To my knowledge, there are no runic inscriptions that mention Thor’s hammer (though its image is present on the runestone at Stenkvista in Södermanland, Sweden). However, if a viking would carve the word mjölnir in Younger Futhark runes, he would probably do it like this (it is a mere assumption):

Note that the last rune is ýr not reið. It is because the final -r in mjǫlnir developed from Proto-Germaic -z. The symmetry of this word written in Younger Futhark runes is remarkable.

Thor’s hammer as a Norse symbol widely used by the vikings points to Norse heathen beliefs. It is not a hate symbol. More on Germanic heathen symbols in my earlier article.

Photo: Thor’s hammer pendant from the collection of the British Museum, dated to the 9th or 10th century, courtesy Thorskegga, all rights reserved. Used by permission.

Next post: Seated Buddha Statuette in a Viking Ship